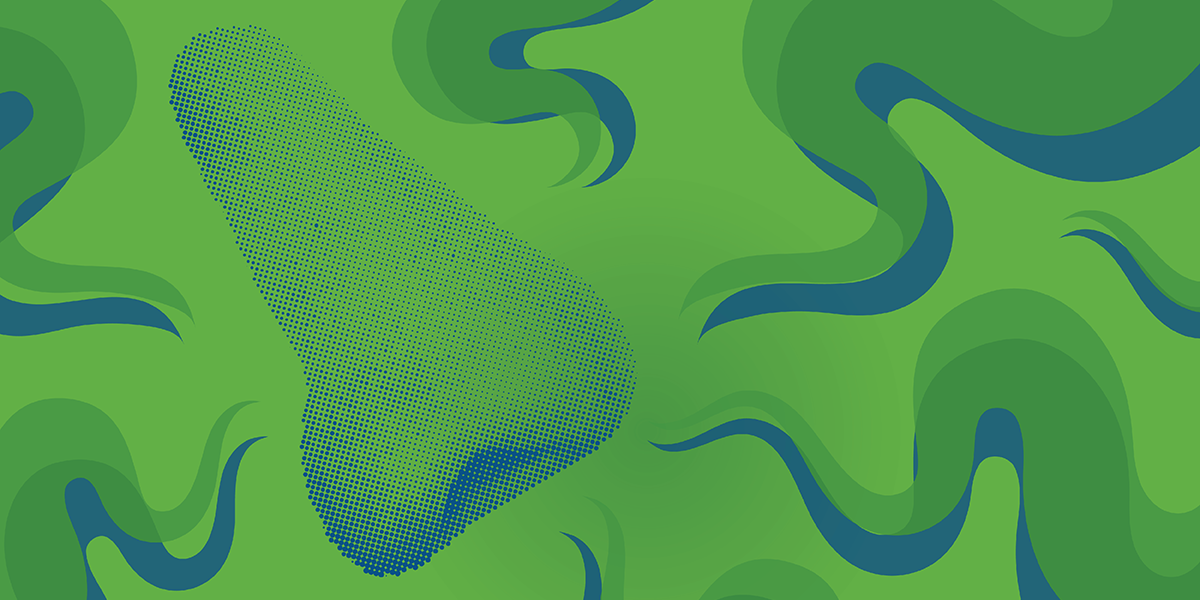 Decline in the sense of smell could be an early warning sign or predictor of Alzheimer’s disease, according to many studies. For example, researchers at Columbia University found inability to identify particular smells on a smell test corelated with memory impairment in the near future (Can a Smell Test Sniff out Alzheimer’s Disease?)

The researchers explain the connection: “The olfactory bulb—which sends smell information from the nose to the brain—is one of the first areas of the brain to sustain damage in Alzheimer’s disease. Brain areas that receive information from the olfactory bulb, such as the entorhinal cortex, are also affected early in the disease. As a result, impaired ability to recognize odors often occurs in people with early-stage Alzheimer’s before memory symptoms are noticed.”

The Columbia team has been using scratch-and sniff tests, checking ability to smell scents such as pizza, apple, coffee, and gasoline.

People who perform poorly on a smell test are “more likely to have had neurodegenerative changes in the brain caused by Alzheimer’s,” they explain. However, a poor result on a smell test is not by any means a diagnosis. “If someone shows memory loss during testing, that would trigger further testing to confirm diagnosis,” commented Davangere P. Devanand, Director of Geriatric Psychiatry and a Professor of Psychiatry and Neurology at Columbia University Medical Center.

Olfactory impairment is common in aging, and likely affects half of seniors aged 65 to 80 years, report Regemorter et al. The olfactory nerve may be vulnerable to toxins, infection, and other factors. In addition, age-related changes in the nerve, along with brain changes, could play a role.

The researchers say that among older individuals, anosmia (full or partial loss of the sense of smell) is predictive of mortality risk overall, and this finding is poorly understood. Along with any neurodegenerative changes, brain aging and general health status are likely pieces of this puzzle, they say.

Those with a genetic predisposition to Alzheimer’s disease, such as carriers of the APOE4 allele, “seem to experience greater olfactory decline than the non-carriers,” say Regemorter et al.

Of course, a minority of individuals can’t identify odors, even in childhood, notes Devanand, but that population is not the group being studied in the Alzheimer’s research.

While there are still many questions to answer about the association between smell and cognitive impairment, the NIA researchers explain, “…loss of olfactory function is closely tied to both the level and progression of neuropathological damage seen in Alzheimer’s.”

Poor sense of smell indeed could be an early warning sign for Alzheimer’s, but it’s important to avoid any unsubstantiated conclusions. “The bottom line is that it’s still difficult to predict memory decline,” according to Devanand.